Shegemi Agota Mcfars is a fictional character that appears in various works by cartoonist and animator Cade Utterback, and appears as the main deuteragonist in the "John Mcfars" series. Created in 2012, Shegemi serves as the smartest of the main cast, although not by too much, and in addition serves as an inventor and the CEO of the fictional "Mcfars Labs" brand. He is the indentical twin brother of John Mcfars. Shegemi has appeared in several of the 2012-2020 "John Mcfars" animations, and co-stars in the upcoming short film, "The Wiz".

Shegemi is a blond-haired Caucasian male, just like his brother John. He has blue eyes, and is believed to be somewhere around 6 feet tall. He wears a red long-sleeved shirt, imprinted with a large, black "S", and blue pants, often presumed to be jeans. He wears the same plain, brown shoes that John does. Shegemi's hair also has the three distinct downward-facing spikes above his eyes that John does. His nose is not visible, and creator Cade Utterback has stated that the people of the John Mcfars series do, in fact, have noses, albeit they were intended to not be visible.

Shegemi is smart, but not a complete genius. He loves to work with electronics and is known throughout ValleyVille for his "Mcfars Labs" brand of useful inventions. Utterback has defined his personality as such:

"Shegemi hates the title of 'scientist', and prefers to be called an 'inventor'. While he does enjoy the field of science, it's never been his favorite; his passion has instead been on designing and manufacturing cool gadgets for his friends and family. On any given day (and when he's not out adventuring with John), he's in his underground laboratory, Mcfars Labs, tinkering away at a new invention idea that might go somewhere, or nowhere at all. Don't put it past him to throw away an idea if it doesn't work - he doesn't always have time to fix what he considers 'lost causes'. Shegemi is also intelligent in the field of business, as he markets his inventions and licenses them under the Mcfars Labs brand to be sometimes sold nationally, if they do exceptionally well in the ValleyVille market.

His goal as an inventor is to better the lives of all people, and so far I'd say he's doing a great job! Most of his inventions find a way to make life easier for people, and some of the others are just cool little ideas he's had over the years. The folk of ValleyVille are really appreciative of Shegemi's dedication to their well-being, often praising his ideas. Shegemi's got his fair share of fans, but he's still treated like a normal human being, which is what he enjoys. He finds fame a bit strange and just prefers a normal life. (Well, normal in the John Mcfars world isn't really normal, but you know what I mean.)

As far as his thoughts and feelings, Shegemi prefers to think rationally about most things, and is always happy to explain something to anyone who wants to listen. Shegemi is very aware of the world around him, and chooses to find happiness in family, spending time with John constantly, and also in his work. It makes Shegemi happy to make inventions that people love and use. Even though he's John's younger brother, he's a bit more mature than John. This doesn't mean he won't laugh at a dumb joke here and there, though - everyone needs a good laugh! The only thing that brings Shegemi down is when one of his inventions fails to work properly, or when it causes unintentional harm. He doesn't want to harm anyone. He just wants to make some cool gadgets that people will love.

It never seemed possible for a younger brother to actually be the big brother, but Shegemi doesn't really play by the rules anyway."
-The Big, Wide John Mcfars Guide (2021, To Be Released)

The creation of Shegemi Mcfars can be traced back to an image dated May 24, 2012. Shegemi was originally created as a brother to John when the idea of doing a "Mcfars Family" spinoff was explored. Notably, early versions of Shegemi have the alternate spelling of "Shigemi", before Cade Utterback changed his name in 2013 to the current spelling.

The initial design of Shegemi Mcfars varies differently from the revised design that is currently used. When originally designed, Shegemi had more of an Asian-inspired appearance, similar to the character of "Data" from The Goonies. Also similar to his movie conterpart, the first image of Shegemi shows that he wore spring-shoes, a jetpack, and held a portable television in his right hand. It seems that the idea of inventing was there from the very beginning, but his design changed very early on. Additionally, Shegemi had a striped shirt and had three downward-facing spikes at the bottom of his hairline, beneath his ear. His eyes had a bit of a slant to them, likely to accentuate the Asian aspect of his intended heritage.

When the "Mcfars Family" spinoff was cancelled in May 2012, Shegemi was soon redesigned to more closely resemble John at the time. When he made his first appearance in "The Attic Finds" (July 5, 2012), his design was very basic and lacked any real semblance of recognizability. His design in this episode was nothing more than a head with eyes and a mouth, and a body that featured stick-like limbs. When he appeared next in "The Day the Evil Was Freed," (August 4, 2012), his design was almost a carbon copy of John's. In mid-2013, Shegemi was redesigned once more to have a blue shirt and red pants, which was his first color appearance. Compared to John's red shirt and blue pants, this design was unique, and was prior to the "S" being added to Shegemi's shirt. By early 2014 (and as seen by the unfinished "Brotherly Love" scenes), Shegemi had finally showcased his recognizable "S" on his shirt, as well as his downward-spiked hair, just like John had in those scenes.

Gradually, much like the other cast members, Shegemi's design rounded out and was perfected more and more into his current design. The official artwork for the main John Mcfars characters wasn't released until late 2019, but this release finally brought forth an official and finalized design for Shegemi Mcfars. 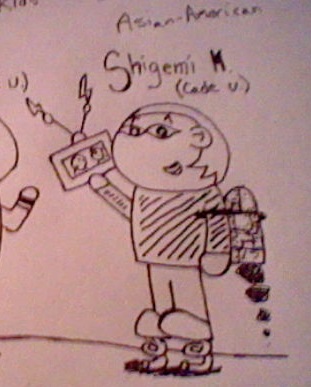 The original design of Shegemi Mcfars, dating back to May 24, 2012. The differences in design are very evident. Courtesy of CartoonCade Productions. 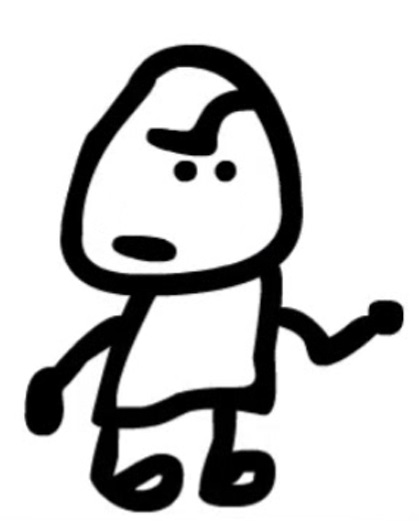 Shegemi as he appears in "The Attic Finds," where he made his animation debut. Courtesy of CartoonCade Productions.
(July 5, 2012) 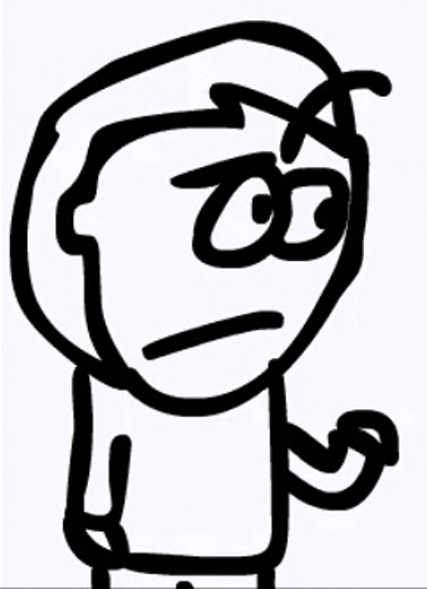 Shegemi as he appears in "The Day the Evil was Freed." Note the similarities to John's design beginning to show. Courtesy of CartoonCade Productions.
(August 4, 2012)

Shegemi points at John in a piece of unreleased promotional art. Note the opposite color scheme. Courtesy of CartoonCade Productions.
(July 19, 2013) 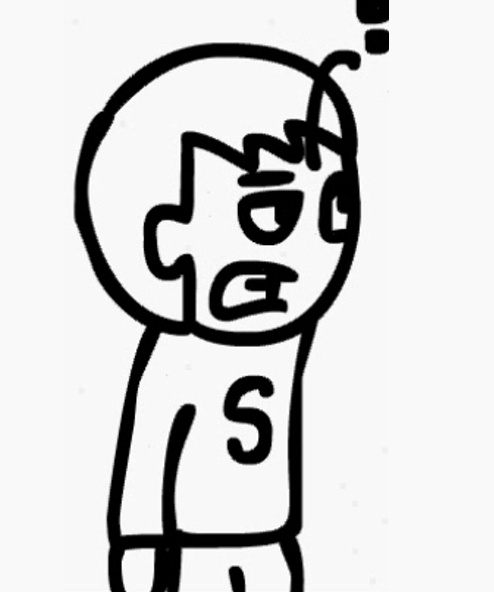 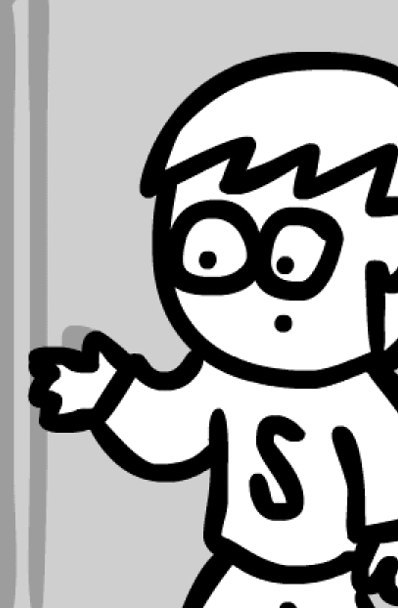 Shegemi as he appears (briefly) in "Eat Your Vegetables". Courtesy of CartoonCade Productions.
(March 22, 2018) 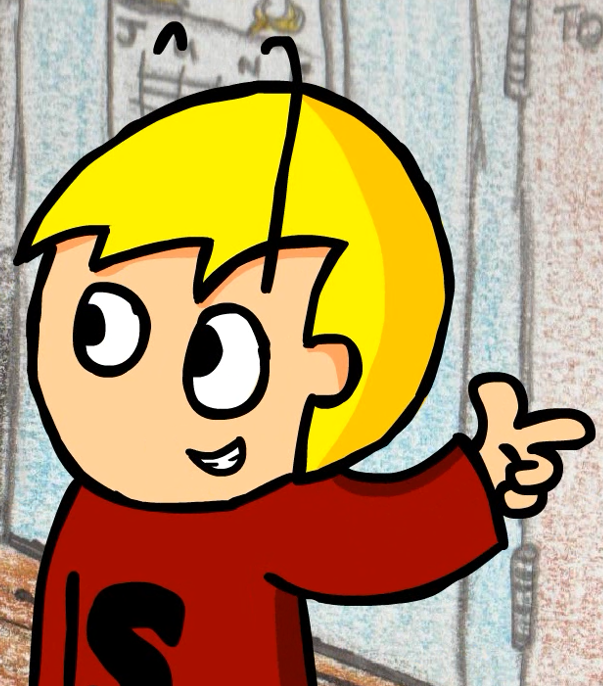 Shegemi as seen in the upcoming animated short film, "The Wiz". Courtesy of CartoonCade Productions.
(2019) 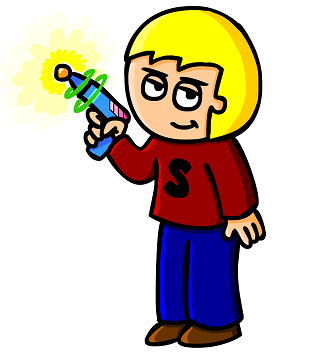 Shegemi has appeared in 10 completed animations as of late 2020. He has also appeared in numerous failed projects and spin-offs, and is currently co-starring in the upcoming animated short film, "The Wiz". The following is a list of all completed (or majority-completed) animations starring or featuring Shegemi Mcfars, as well as their original air dates (if available).

Shegemi has appeared in various other forms of media since his creation. He has appeared in various comic strips, sketches, digital art pieces, storyboards, and other production materials. A proposed "Mcfars Labs Inventions" book would have been published in 2018, but no documents have surfaced and most of the content remains unknown other than the theory that the book contained art and information about various inventions.

Copyright 2019, 2020 by CartoonCade Productions. All Rights Reserved.
John Mcfars and All Names, Locations, Characters, Scenarios, and other Related Items are Copyright Cade Utterback. Keep On Keepin' On!