Johnathan Daniel Mcfars (known simply to his friends as "John,") is the main protagonist of the series.

Johnathan Daniel "John" Mcfars is a fictional character that appears in various works by cartoonist and animator Cade Utterback. Created in 2011, John has appeared in several pieces of art, comic strips, and animations. Since 2012, John has starred in his own animated series, simply titled "John Mcfars." The series has had no official debut, and mostly consists of several short animations. John has appeared in 20 animations so far in this series, and is also the protagonist of the upcoming animated short film, "The Wiz". He serves as the mascot for CartoonCade Productions, which was founded by his creator and has produced all John Mcfars animations, comic strips, and merchandise since 2012.

John is a blond-haired Caucasian male. While it's never seen in any of the animated segments, and is rarely known, John sports blue eyes. He wears a red long-sleeved shirt and blue pants, often presumed to be jeans. In the "Big, Wide John Mcfars Guide," Utterback has stated that his intention was for John to be depicted "wearing blue jeans." John also wears plain, brown shoes, although it's not known what kind of shoes he wears and is never explicitly stated in any form of media. Shegemi shares a similar outfit, with the only major difference (and for that matter, the only one at all) being a large, black "S" imprinted on his shirt. John's hair is notable for having three distinct downward-facing spikes above his eyes. His nose is not visible, and creator Cade Utterback has stated that the people of the John Mcfars series do, in fact, have noses, albeit they were intended to not be visible.

John is known for being a normally happy and enthusiatic character. Utterback has defined his personality as such:

"John is an avid fan of anything considered outdated, whether it be older TV shows, movies, music, technology, you name it! You can catch him watching The Blues Brothers any day of the week... or maybe he's jamming out to some Ted Nugent? What about Alice Cooper, or Mike Vickers? John also spends his free time reading. But he's not catching up on the great American classics - no - he's doing tons of deep research on music, television, games, movies, and everything in-between! When there's nothing to do, he's been known to fire up the ol' Atari 2600 (his favorite system), or put a record on. (He's not a big fan of 8-Tracks, though.) He's also very smart. He didn't go to an Ivy League school or anything like that, but he knows his left from his right and the sun from the moon. And he also knows some really random trivia, so don't ever be surprised at his random knowledge bombs. He's practically an encyclopedia of awesomeness! John is quick on his toes and always ready to quip - he's not the kind of person you'd want to start a feud with. He can outsmart almost any foe.

But perhaps what John is known for most is being a generally nice, happy, enthusiatic and caring person. He's always ready for whatever an adventure holds. He makes sure to take care of Shegemi, and protect his younger brother at all costs. There are some times where life gets him down, especially concerning his fear and hatred of being alone, but he always finds a way to power through it and continue being the best person he can be. (And just between you and me, he's got a bit of a thing for a certain someone... but don't tell him I told you!)

No matter which way you look at it, with John around, you bet you'll have yourself a good ol' time."
-The Big, Wide John Mcfars Guide (2020, To Be Released)

The creation of John Mcfars can be traced back to mid-2011. Utterback recalls that he created John in an attempt to create his own original character for use in comics and illustrations. "At the time," he has stated, "the only things I had learned to draw were from Mario or Peanuts, which of course is Charlie Brown and Snoopy. Aside from that, the most I could muster on my own were stick figures, and I wasn't really content with that. So I sat down at the kitchen table on what I believe now was either June 17th or 18th, and I just drew whatever came to mind. I had these cheap Bic markers and some loose leaf paper to work with, which was apparently good enough because, well, here we are [light chuckle]."

The initial design of John Mcfars varies differently from the revised design that is currently used. He originally wore a blue-and-pink striped helmet, as well as a green shirt and red pants. His shoes were simply black. This design was only used for less than half of a year, according to Utterback. Revisions were made almost immediately, and John is known to have only used his original design in three comic strips. According to Utterback, John's original design was heavily inspired by the Disney XD series Kick Buttowski, Suburban Daredevil, with John being modeled after Kick himself. In a similar fashion to Kick, John was created with the intent of also being a 10-year-old boy. This aspect of his character was eventually dropped in favor of him being an adult, but it took over one year for this change to be made.

The first change made to John, according to Utterback, was removing the helmet. At this point, John's hair was undefined, and he often was depicted with dark, brown hair. There weren't any hair spikes at this time, so hair shape varied constantly. John's eyes were connected, rather than separated.

It took over a year before John's design was settled upon and improved. Slowly, but surely, his eyes, clothes, hair, and personality were reworked into the modern design. Utterback considers this design to have been perfected in 2017, when he made a short aniniversary animation with John's current design in full color for the first official time. The official artwork for the main John Mcfars characters wasn't released until late 2019, but this release finally brought forth an official and finalized design for John Mcfars. 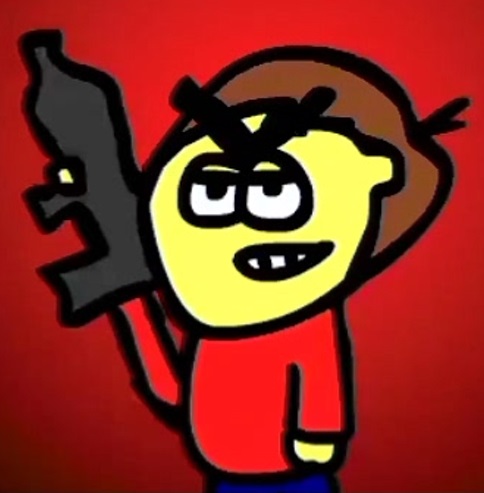 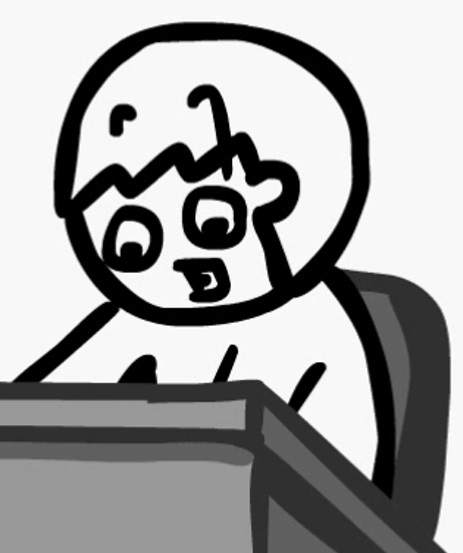 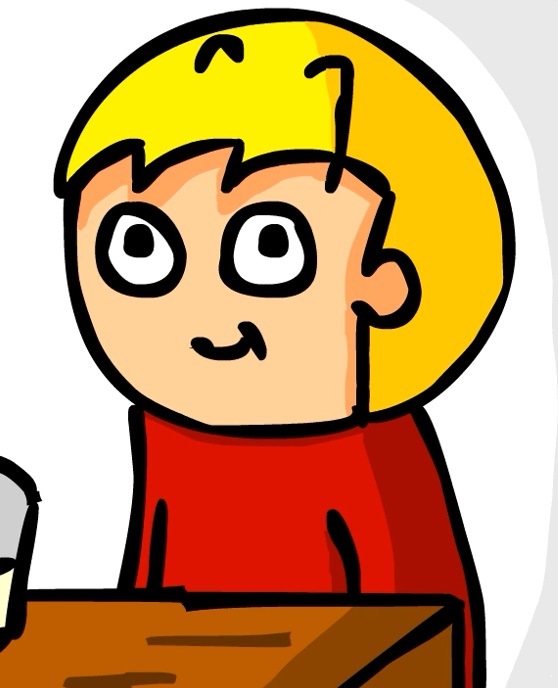 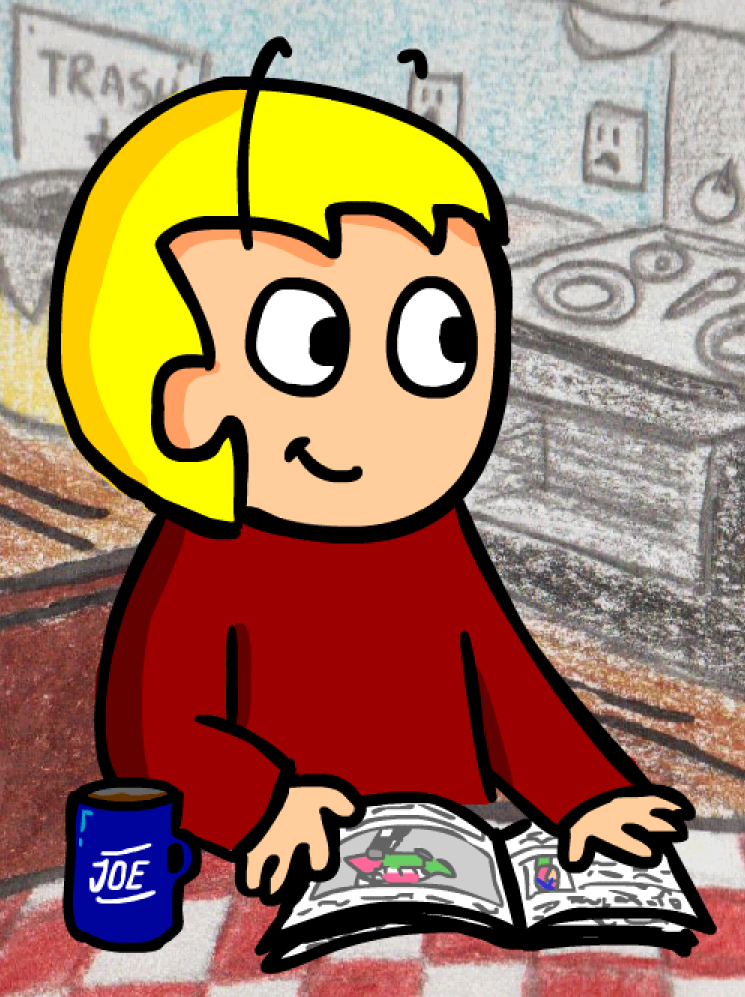 John sits at the kitchen table in the upcoming animated short film, "The Wiz." Courtesy of CartoonCade Productions.
(2019) 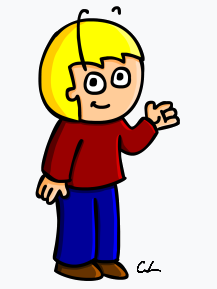 John has appeared in 18 completed animations as of late 2019. He has appeared in numerous failed projects and spin-offs, and is currently starring in the upcoming animated short film, "The Wiz." The following is a list of all completed (or majority-completed) animations starring or featuring John Mcfars, as well as their original air dates (if available).

John has appeared in various other forms of media since his creation. He has appeared in various comic strips, sketches, digital art pieces, storyboards, and even on a t-shirt, which saw a very limited run. John serves as the mascot of CartoonCade Productions, and appears on almost every product made by the company. In 2014, an official "John Mcfars" soundtrack was released on CD. This run was very limited and very few copies are known to exist. In 2015, a very limited DVD run of "John Mcfars: Season One" was produced. It is unknown how many copies exist, as they are very scarce. In 2019, "The Big, Wide John Mcfars Guide" was proposed. It is intended to serve as both an encyclopedia of the John Mcfars universe, as well as the "show bible," should the series ever see a pitch to a major television network. Arcade Entrepeneur and Artist Dustin Wilcox has been so far the only person to be approved for drawing official John Mcfars art to not work for CartoonCade Productions, and his works have been very scarce. Wilcox has worked with Utterback closely in developing few certain aspects of the John Mcfars series, including some concept art. A proposed "Mcfars Labs Inventions" book would have been published in 2018, but no documents have surfaced and most of the content remains unknown.

Copyright 2019, 2020 by CartoonCade Productions. All Rights Reserved.
John Mcfars and All Names, Locations, Characters, Scenarios, and other Related Items are Copyright Cade Utterback. Keep On Keepin' On!